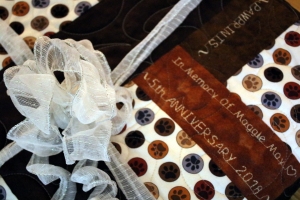 Our 5th Anniversary fundraiser was a super success, raising $720 for the Maggie May fund and yesterday we had the pleasure of presenting our Anniversary Quilt “Pawprints” to a very excited Erin McLaughlin. 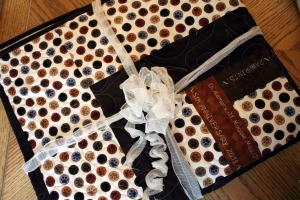 Erin has been a supporter of IMOMM since 2015 when we met at our booth at the National Agility Championships. Her furry family (with numerous Maggie May Blankets) are members of the HRH Blanket Club, will there be a new member in the near future? 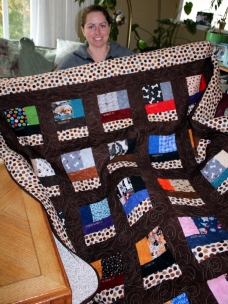 Erin, has recently relocated to BC from Alberta, so we were very excited to once again be able present our most beloved creation to the winner in person.

Erin was all smiles as she says she never wins anything, and sweeter yet, that her “Fixx” and many furry friends she knows are in this years quilt.  This year’s quilt was sought after by many, but as a good friend once said, it goes to where it was meant to go.

This entry was posted in Blankets & Bandanas, Fundraisers. Bookmark the permalink.